We’ve all heard the Tale of the Two Wolves. To summarize, the story has an old Cherokee man telling his grandson about two wolves, one representing good and the other representing evil, fighting for dominance. When the grandson asks which will win, the grandfather responds “the one you feed.”

Dogs don’t have any such thing as good and evil, but they do have behaviors you want and behaviors you don’t want. You might think aggression is evil, or at least bad. But are police dogs bad when they are aggressive?

Usually when people are seeking help from a trainer, it’s because the dog is doing things that people really don’t want him to. You can think of the behaviors you want as one wolf and the behaviors you don’t want as the other wolf. The goal is to starve the “bad” wolf while feeding the “good” wolf so he becomes big and strong.

What do I mean by this? I’m glad you asked. To “starve” a behavior, you prevent your dog from getting anything he wants when he does something you want stopped. You can do this by preventing the dog from having the opportunity to do things you know you’re not going to want, such as chewing the furniture. To “feed” an alternate behavior, such as chewing his own toys, make sure doing it pays off really well. Often, that will be a food reward, but it could also be play, petting, or the opportunity to run.

I’ll give you an example. Today, I had a repairman out looking at my heater. Before I let him in, I put the dogs in the laundry room with something to chew. The closed door prevented them from jumping on the repairman, “starving” that behavior. Once the repairman was fixing the heater, I brought the dogs out on leash. Then we practiced calm behaviors. I reinforced them with tug, their regular kibble, and a few pieces of cheese.

You may notice I haven’t said anything about violently killing off the “bad wolf” by trying to punish the behavior you don’t want. On one level, I don’t do this because, like I said, there’s no “good” behavior and “bad” behavior, just behavior you do and don’t want. Dogs aren’t mind-readers. They don’t know which of their behaviors work in our world and which don’t. So it’s not really fair to treat them like they should know.

But on a more pragmatic level, you don’t want to do this for the same reason you shouldn’t kill coyotes that aren’t aggressive toward dogs, people, or large livestock. Those well-behaved coyotes are holding the territory and preventing other coyotes–ones that might be aggressive–from moving in.

When you try to punish a behavior away, it’s hard to know if the dog will have the same idea of what he’s being punished for as you do. In the above example, the puppy believes it’s peeing in front of you that’s being punished, vs. peeing inside, which is what you meant. It’s also better to pick what, specifically, you want to replace the behavior you’re trying to eliminate than to let the dog try to figure it out and guess wrong. That’s frustrating for everyone.

This site uses Akismet to reduce spam. Learn how your comment data is processed.

Our founder, Amy Blankenship, has trained dogs off and on for over 20 years. When she moved to Jackson, MS, to help care for her elderly mother, she slowly realized that dogs and people don’t just naturally know how to cope with the challenges of this situation. And Yes Ma’am Dog Training was born to help them learn. 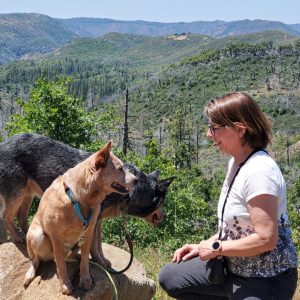